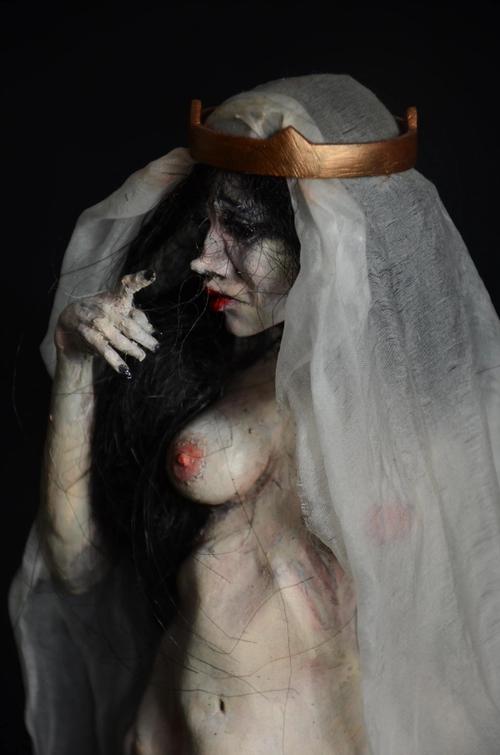 This piece has undergone a number of transformations, particularly regarding its garments. Originally, the Madonna was completely dressed in a chiton-like dress, taking the appearence of a more classical piece. The piece originally had a veil and a holy halo, but these were all eventually discarded, as they were not radical enough. In the end, the Madonna was stripped down to the bare minimum and was given a crown in the style of the french gothic madonnas, in order to create a clear contrast between imagery and depiction.

If one was to take a look at the development of the depictions of the Virgin Mary during the course of history, one would probably fascinated by the depictions of her in gothic and particularly renaisance art. I am quite fond of renaisance decpictions of biblical figures, because of the way they is represented in a then contemporary manner. What I mean by this, is that the stylistic difference between the clothing of saints and what people were actually wearing on the court was so small, that in a way the seem to belong to the same period, equivalent to seeing the Virgin Mary wearing trousers and Jesus wearing a suit. I know, the comparison might seem ludicrous, mainly because our depictions of biblical figures have shifted to what might seem to be a 'historically speaking more accurate' depiction, making the gap between them and us bigger, dehumanizing them.

I find the dehumanization of the Virgin Mary particularly concerning, as this she is, in many ways, an implicit role model that defines femminity. If we take a look at the Virgin Mary an the cult built around her at the time of the renaissance, we would see her role as nursing mother in the center of it, very much like that what was expected from women back at the time. Although often referred to as the Queen of heaven the role of Mary in the iconography was hardly more than twofold:

Compared to what the role of women has become after years of sexual revolution, feminism and fight for equal rights, the gothic and renaissance depiction of the ideal of woman seems quite archaic and troublesome and quite ripe for a revision.

About the desecration of Mary

I have often heard my work to be profane and insulting, desecrating the holy and simply obscene. I would argue this is only partially true. It might be true that all the body references I used for this piece were porn actresses and that the depiction of such a sinful woman on a pedestal could be interpreted as mocking religion, but here I ask: are we not all humans born the same and the same to eyes of God? So why would sex workers doing an honest job be dehumanized and frowned upon? This is my answer to these accusations: Mary was a woman and thus as human as any of us, with her struggles, temptations and pleasures, all of them omitted in the Bible, that, is the real desecration of Mary, her instrumentalization and reduction to a womb and a mourner, nothing more.

Stabat Mater Dolorosa attempts to give that depiction something of that humanity back, making her look vulnerable and human. Not only because of her pain, but also because of her fragility, her nudity, her sexuality. All human things we can all relate to.

A summary for collectors

We believe in freedom an privacy. That's why we won't track you here.

We only set a single cookie to keep this banner closed once you close it.