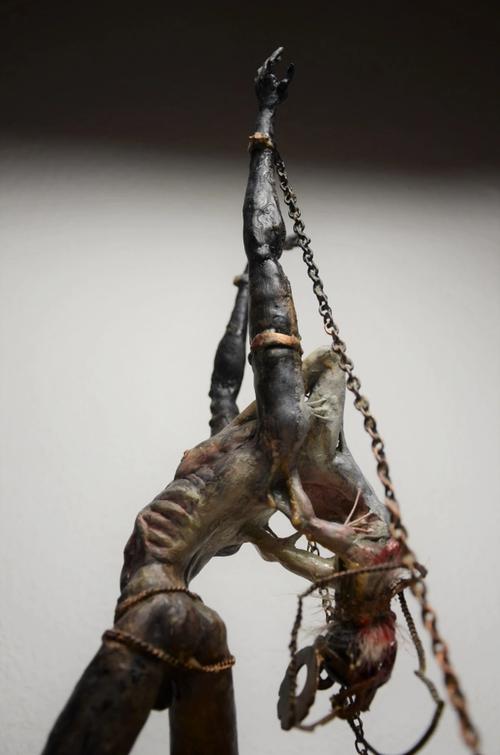 Some few words on this one

I am always thrilled by the response I normally get to **Rex Tremendae**, the spectrum is very wide and goes from a genuine fascination and reaches a vocal hate. The piece was almost destroyed at one exhibition by a rather conservative pal. Really, no joke.

I don't want to tell you what to see in this one, but I can say one or two words on what the subject is not:

It is, on the other hand, an ambiguous duality praying for salvation, for redemption from human condition. Chained to the mud. Tranforming, ever becoming. Marked by lineage of blood and suffering that is in a great deal self inflicted. It is an ouroboros made of human flesh, eating flesh and becoming flesh itself. Giving life and taking life. And it wears its own crown.

Fancy name, but what's the subject?

There is a simple and a not so simple answer to that question. The simple one is: because at the time of making, I had Mozart's requiem playing in the background not stop. It was a heavy Rex Tremendae Majestatis phase, if you so will. But there is of course more to it, and we have some time, don't we?

The not so simply answer boils down to a long struggle I had while picking a name. The primal subject of the the piece was and remains a tormented duality, thus the first idea was to call the piece Eros and Thanatos or Amor et Morte, probably any of this titles would have been a good marketing choice and would have given the piece a good SEO boost, but there was something lacking to it. And there is where my old friend Wolfgang, a french band called Eths and my catholic education came into play.

Sidenote: In case you don't know Eths, google them! By that I mean, browse the internet with the search engine of your choice. But joke aside, I really recommend them. A song I like in particular is Adonaï. Go watch the video in the link and you might also discover some resemblances between the original album art and Rex Tremendae. Besides, if you happen to speak some french, you might catch a gist of the lyrics saying something like (in the english version of the song):

We're waiting for you

Duty around my mouth

No fear, no hell, no wizard

I adore, I do want you

or, of course, the very present:

Please help me out

Keep me, I am your slave

So, you might be asking why I didn't even consider namig the piece Adonaï/Adonai and you would be right to ask that. I'm glad you did. The answer is quite straight forward: to avoid a major missunderstanding. See, Adonai is one of the many names of God (the god of David) with somewhat the meaning of "the lord", like in the latin "maiestatis". The source of these myriad of names of God is the tetragrammaton, a set of 4 letters יְהוָֹה (YHWH), that renders all these names when filled with different vowels. The thing with this tetragrammaton is that it is deeply rooted in the Judaic tradition, a tradition I am quite yet ignorant of. So, in order to avoid any interpretations that would seek the many faces of God in the piece, or a duality in the Jewish vs. Christian dichotomy of the name, I just decided to avoid the namesake completely while keeping the subject of imploring redemption to God. And there is where Mozart comes into play.

I wouldn't in any way suggest that Rex Tremendae Maiestatis is Mozart's exclusive creation, or that his version is the best. But I have to admit liking the interpretation of his Requiem by the Bach Collegium, check it out. What made Mozart's Requiem an inspiration for Rex Tremendae was, apart from the beauty and solemnity of a D-Moll composition, is the hopefullness the his Rex Tremendae Maiestatis sheds into the plea, as if the suffering of this life could be ended by the virtue of God alone. This source of light is what isnpired the color palette of Rex Tremendae and what gave it the composition a begging and devote undertone, instead of despair, frustration, violence or rage, as opposed to Eth's take on the subject.

If you are somewhat like me and belong to the remarkable 16% of the world's population that grew up in catholic environment, you surely had to deal a lot with dealing with "your cross" and with being stoic, like Christ on the via crucis himself. And that takes of to the subject of Easter (Христос Воскресе!) and the imploration for salvation, because, as per Catholic idiology, the deeds on earth cannot redeem absolution. This creates the dominant belief of unworthiness and servitude as in "Lord, I do not deserve to have you come under my roof. But just say the word, and my servant will be healed." Matthew 8:8, that I meant to plastify in Rex Tremendae.

With these motifs and this imagery in mind, the creation of Rex Tremendae was set to be a message of the human duality of belligerence and piety, both leading in a way to a self destruction only mankind is responisble of. A selfdestruction that takes form in the violence against apparent others, who are, in the end, part of the same continuity of mankind. This carnage, man made and man driven ist too often seen as necesssity, as an unstoppable force of fatee that can only be stopped by the divine. And thus mankind implores to be saved. The plea is addressed to a great king, but does it listen? And if it does, is it pious or does it rejoice at the sight of the struggle? And who is the root of evil? Is it God? Is it mankind? These are the questions Rex Tremendae embodies with its eternal growth into an endless ouroboros that consumes itself to continue the passing of blood and havoc, blinded by its very own crown.

A summary for collectors

We believe in freedom an privacy. That's why we won't track you here.

We only set a single cookie to keep this banner closed once you close it.